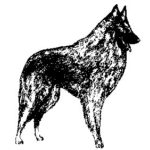 The story of our Tervueren started in 1984 when a female Tervueren named Carissa Mahruk v’t Markermeer came to us. The dam of this fantastic dog was Kaleb Juventus Biarda a certified working dog with an excellent exterior. The father of Carissa was the certified German working dog Mahruk von Lichtental which was a son of the legendary Japon du Clos de Raze. Mahruk was not only a working dog but also a VDH-Champion. Carissa had a very good type and an even better character. Carissa gave us two litters with excellent dogs. The father of the first litter which was born in 1987 was the Dutch Champion Endor de la Tourbe, and the second litter born in 1989 was sired by his half-brother Frere Marcus de la Tourbe. Unfortunately we lost Carissa (as she had cancer) when she was six years old. The children of Carissa had a very good type and the characters were also excellent. When I heard the bad news that one the dogs from the first litter of Carissa was suffering from epilepsy I decided to stop the breeding. It was a difficult decision but I thought that this was the only way to solve the problem of epilepsy.

It took almost ten years before another Tervueren came to our Kennel again, but now we are very happy that we have Tervueren again. The name of our new Tervueren was Ybrisca de la Vignette and she was born in 1999. Her pedigree on the female-side goes back to Groenendael-breeding. The father of Ybrisca is the well-known Golan van de Wielander who is a Dutch Champion as well as a certified working dog. We had a litter from Ybrisca and Mike van de Schagerwaard in November 2001. From this litter we kept a beautiful large male dog named Cubik v’t Guitpad. This dog developed very well and  became our promise for the future. He covered  several female dogs in 4 different countries which were all very successful .So after a break of more than 12 years we were breeding Tervueren again. We had also another Tervueren male dog in our kennel. This dog named Padron v’t Guitpad (born in 2000) was a product of our Groenendael breeding. Padron is a large sable dog with an excellent type and a stable character. We hoped to contribute to the Tervueren breeding with this fantastic dog but unfortunally he was not fertile  . The second litter of Ybrisca de la Vignette was from the multi Champion Xenakis du Clan des Fauves and this litter was born in 2003. We kept a female dog from this litter and named her Danicha v’t Guitpad. In this litter there was also a grey female dog named Dame Dante’s Zoeteke v’t Guitpad and this dog was exported to the USA.

The E-litter Tervueren were born on 26 March out of Ybrisca de la Vignette and the working dog (IPO-1) Odyn v.d Lamar. It was a small litter with only 2 female pups. There were some complications with the birth but when the pups were born Ybrisca and the two little bitches recovered very quickly and grew very well. Unfortunately one of the pups died at the age of 6 weeks. She had complications with her heart and subsequently died during investigations at the clinic. There was only one pup left from this litter. She was named Eshah v’t Guitpad and we bred one litter with her.

On 2nd February 2006 the first litter of  Danicha v’t Guitpad was born. This litter was also sired by Odyn van de Lamar and there were 4 males and 5 females in this very promising litter. We selected from this litter a beautiful female and named her Ferrah v’t Guitpad. The second litter of Danicha born on 17 April was our G-litter Tervueren and the father from this litter was the the Belgium Tervueren Van de Pillendijk Darco. In this litter there were 4 males and 4 females. This also was an excellent litter from our Danicha.

On 22 March 2008  we welcomed the H-litter Tervueren produced by Eshah vt Guitpad  and Amigo Ingoz de la Tyvell. In this litter 2 males and 3 females were born. It was a good litter and especially  the fine characters of the dogs surprised us. The year 2008 was a very busy year for our breeding. The last litter of this year was the first litter of our young Tervueren  Ferrah v’t Guitpad  and the American import Blackwaters Blue Ocean. This beautiful  combination also produced a litter with 5 pups on  12-10-2008. In In this I-litter tervuerens 3 males and 2 females were born. This also was an excellent litter from our Danicha.  On 3-6-2010 our Danicha v.’t Guitpad was mated to Amigo Ingoz de la Tyvell.  The pups from the last litter from Danicha were born on 7-8-2010. In this litter 3 males and 5 females were born .It turned out to be a very nice litter and one of the male pups named Jamash went to Austria. Because we also lost our Ybrisca in 2010 we decided to keep a female dog for ourselves and we selected from this litter a beautiful fauve female dog named Jodie v’t Guitpad. She is a beautiful dog with solid bones and an exceptional character. In 2012 she was selected by the NVBH and became pE.  Her brother Jamash v´t Guitpad went to Sindi Saljii in Austria. Jamash became an official Racing dog,a Rescue dog and an International  Champion  as well as an Austrian Champion  before the age of three years.

The second litter from Ferrah was born 08 August 2011. The father of this beautiful K-litter was Caruso de la Chenestre from Belgium breeding. In this litter there were born 2 males and 4 females.

Ferrah’s last litter  was  the L –litter Tervueren and Ferrah v’t Guitpad was mated to the German Riley vom Motodrom on 17-04-2013. On 16-6-2013 a litter with 3 males and 3 females were born. It was a wonderful litter with beautiful and promising pups. There was one grey male and one grey female in this litter. We selected the grey female Lamira v’t Guitpad for ourselves.

The first litter from Jodie v’t Guitpad came when she was allready 5 years old . Due to several circumstances she never had offspring so far. Jodie was mated to Rodin v Moned a beautiful and great grey male on 24 -3-2016. On 24-5-2016 the pups were born. All the pups were red and 4 males and 3 females were born in this M-litter Tervueren.