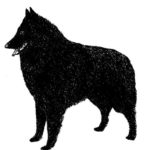 The history of our Groenendael goes back to the year 1974 when Sonja fan t’Henriek Hus came to our place in Kropswolde. This nice female dog had an outgoing character and a good construction. After some years we decided to breed with this dog. Sonja gave us two litters from Terra Nova’s Aston, a famous Groenendael in those days. Aston was a working dog with a strong character and an excellent type. Aston was a large dog but well proportioned.

From the first litter, which was born in 1980, we kept Nina v’t Guitpad and Nina helped us to continue with our breeding. Nina gave us two good litters with beautiful dogs. From the first litter born in 1984, which was a result of the mating with the Belgium import Engel du Domaine Ponti, we kept Anka v’t Guitpad, a beautiful  dog with a good type and a healthy constitution. Anka was in our Kennel for almost seventeen years and died in 2001. Kaleb Juventus Aristides, a dog of French breeding with a very good type, sired Nina’s second litter. This litter born in 1985 was also of good quality and two male dogs from this litter were officially certificated as working dogs. We therefore decided to mate Anka v’t Guitpad and Kaleb Juventus Aristides. The dogs in this litter born in 1986 were even better and we decided to keep a puppy to continue with our breeding. This dog named Eyra v’t Guitpad developed well and she became important in our breeding. The other combinations with Anka were with two dogs from the Kennel Del Castel Sardo. One litter was sired by Don Urban Del Castel Sardo in 1988 and the other by Don Neville Del Castel Sardo in 1991. From this combination we had the working dog Haraz v’t Guitpad till 2005  in our Kennel.

Haraz was a large dog with an excellent type and a very strong character. We also had the opportunity to breed a litter with Hiris v’t Guitpad who was a full sister to Haraz. Hiris had a litter from the Belgium working dog Navaron du Pays des Flandres in 1994.

With Eyra v’t Guitpad we made three different combinations which were all successful. Don Urban Del Castel Sardo sired one litter in 1991. This combination resulted in dogs with a very  good type. Another litter was sired by the Belgium working dog Navaron du Pays des Flandres in 1993. Two male dogs from this litter were officially IPO certificated. One of the dogs named Jaco v’t Guitpad even reached IPO –III which is the highest level. The best combination we made with Eyra was with Don Neville Del Castel Sardo. This combination resulted in a litter of twelve pups born in 1990 with good types and strong characters.

From this litter we kept Gisette v’t Guitpad a dog with an excellent type and an excellent character. With Gisette we tried different combinations. The first combination was with Joey Wendy van Lana’s Hof in1995 and another with the Belgium import Rocky de Marcolina in 1996. From this combination we had Nikyra van ’t Guitpad in our kennel for many years. We had the opportunity to breed with Ocean v’t Guitpad a beautiful bitch from Gisette’s last litter born in 2000. This litter was sired by the Belgium working dog Tsisco van de Hoge Laer. Ocean v’t Guitpad gave us two extremely good litters.

From Nikyra v’t Guitpad and the French import Greco de la Grande Lande we also had a litter in 2000. From this litter we kept a large sable coloured male dog named Padron v’t Guitpad.We hoped to contribute to the Tervueren breeding with this dog but unfortunately he was not fertile and so he never got offspring. The first  litter from Ocean v’t Guitpad was a combination with the multi Champion Boetsch de Bruine Buck and this litter was born at the end of september 2002. In this litter there were five males and only one female which we kept to continue our breeding in the future. This female dog named Qasima v’t Guitpad had a good type and also an excellent character. So we could continue our Groenendael breeding.  The second litter of Nikyra v’t Guitpad was born February 2004. The father of this litter is the Italian import to Belgium  Arras-G  Del Colle Ombroso.. This litter however was very small; in fact there was only one female dog born and no male dogs at all. As this litter was so small we decided not to keep this female dog but to try to breed a litter with Ocean v’t Guitpad and Arras-G Del Colle Ombroso. This litter was born in August  2004 and there were five males and four females in this litter. From this litter we selected a beautiful female dog called Shiva v’t Guitpad.  She was  really a beauty and also her character was excellent. She contributed a lot to our Groenendael breeding with excellent offspring.

The T-litter Groenendael were born on 11 August 2005 to Ocean’s daughter Qasima v’t Guitpad and the Dutch Champion Kay of the First Triangle. There were only 2 female and 1 male pup in this litter. The pups from Qasima’s second litter were born 28 April 2007. In this U-litter there were 2 males and 6 females, especially the characters of the dogs in this litter were very good and we selected a beautiful female named Umrah to continue our breeding. The father of this litter was the very elegant and typical Dutch Champion and Bundessieger Pe Spike Donna v Lana’s Hof.

In 2007 Shiva v’t Guitpad  was mated to the NVBH-Clubwinner from 2006 Don Night Dancer Del Castel Sardo but there came no pups. In 2008 Shiva was mated to the multi champion Quinto Rival de Bruine Buck  and this time the mating was successful and  4 males and 4 females were born on 26 April 2008 in this V-litter.

On 12 May 2009 Qasima’s last litter was born. The father of this beautiful  W-litter was Arès des Perles Noires a very good dog from French breeding. The female side of his pedigree is a nice blend of the  of the best  Groenendael and Tervueren breeding lines. The father of Arès is Donatrix Quastor which is a very good dog from Scandinavian origin. His pedigree contains a lot of influences from the famous Finnish Valkohampaan–kennel which have been breeding a high quality of Groenendael for more than 35 years. In this litter there were 5 males and 4 females. From this litter we did not keep a dog for our own breeding because we already had Umrah to continue Qasima’s breeding line. We were charmed by the quality of the litter however and so we decided to try it again with Shiva and Arès at the end of 2009. The mating took place on 25-12-2009 the first day of Christmas.  There were 6 pups born (2 males and 4 females) in this X-litter Groenendael on 24-032-2010. From this litter we selected a beautiful female named Xantha v.’t Guitpad.

Umrah v’t Guitpad gave birth to her first litter on 12-3-2012. There were 3 males and 2 females born in this Y-litter but unfortunately one the males died after one day. The other 4 pups did very well and it was a very good litter. The father from this litter was Hurricane v.d Schagerwaard.  Hurricanes pedigree is from the male side from English origin and his mother came  from Hungary.

The last litter from Shiva v’t Guitpad was our Z-litter Groenendael and Shiva v’t Guitpad was mated to the Belgium dog Jago de Sincfal. on 04-06-2012. Jago was born in Belgium in kennel the Sincfal from a very solid female breeding line .His father was from French breeding. On 4-8-2012 a litter with 2 males an 2 females were born. It was a wonderful litter with beautiful and promising pups.

The second litter from Umrah v’t Guitpad was our A-litter Groenendael and  Umrah was mated to Jago de Sincfal on 10-08-2013. The pups of this litter were born 13-10-2013. In this litter there were  born 3 males and 3 females. This litter was very beautiful with  dogs of great character and construction. One of the male dogs Ailan v’t Guitpad (Dutch) was exported to Astana Kazachstan to Vladimir Dmitriv and Ogul. This dog is very succesful and becane Asia-Winner when he was two years old. We were very surprised when Vladimir and Ogul came back to Kropswolde to show us Ailan when he was an adult.

Because of the great quality of this litter we also decided  to combine our Xantha v’t Guitpad  with Jago de Sincfal. Xantha was mated on 17 May  2014 and this B-Litter Groenendael was born 18-7-2014. There were 2 males and 6 females in this fantastic litter .

For Xantha’s second litter we decided to combine her with Hurricane v.d Schagerwaaard from Germany

because of the good offspring we had from this studmale with Umrah v’t Guitpad. This C-litter was born on 26-1-2016. There were 4 males and 4 females and the pups were very good. Two males were exported to Germany where they are are very sucesfull. Chadow v’t Guitpad became succesfull on the shows and Conan on the race-track.