Araf El Maklouf was a typical product of the Sultana Family breeding program in France based on the cross between great stallions the straight Egyptian Masan by Habdan Enzahi and the Egyptian related Maklouf by the well known Russian bred Kilimanjaro. The Stallion Kilimanjaro was a sire of National Champions in North America and Europe. His best-known daughter, Magnolia, is the dam of 3 National Champions including U.S. National Champion Stallion *Marsianin. The dam of Araf El Maklouf (Rahoula El Masan)was sired by Masan who was considered as the best sire of his generation in France he produced outstanding offspring for endurance but also great show winners. Habdan Enzahi,his sire, is one of the most influencal Nazeer’s sons in Europe, with Kaisoon and Aswan, he produced a lot of legendary sons and daughters in Germany with the famous Marbach Stud and gave to this country some of the most outstanding egyptian arabians who made his worldwide reputation. Maklouf’s dam Mabrouka was the full sister of Masan. Maklouf was Twice World Champion Stallion and sire of Targuia El Maklouf Twice World Champion Mare. Maklouf has sired many international champions and endurance and race winners as well. In fact the linebreeding was the source of a lot of champions. Araf El Maklouf has all the qualities needed to be an outstanding sire, his pedigree is a nice blend of multiple international champions and champions producers. 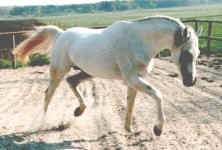