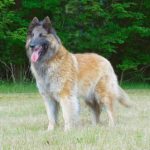 Ybrisca was born in 1999 from a cross between Golan vd Wielander and Whitney v’t Belgisch Schoon. She is a beautiful dog with an excellent type and a very nice character. Her father was a  working dog and  also Dutch and International Champion.With Ybrisca we started our Tervuerenbreeding again after a break of more than ten years.The offspring of Ybrisca is very promising and we are very glad that she came to our kennel.